UNSOC is a three-week course that takes place at the SWEDINT International Centre (Stockholm). The course is attended by military staff officers, UN civilian staff officers and UN Police role players.  It was was held between November 19 and December 7, 2018.

The overall purpose of the UNSOC is to support the pre-deployment training efforts of Troop Contributing Countries (TCC) by providing UNDPKO standards training and thus ensure a common military approach to work at Force and Sector level Headquarters in UN peace keeping missions.  The course complies with the United Nations Staff Officers Special Training Materials (SO STM). 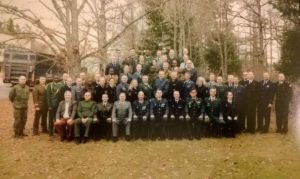 The UNSOC is intended for military personnel selected by UN Member States to be deployed as military staff officers in a UN Peacekeeping operation.  The course included of over 50 military officers from more than 12 countries.  The highlight of the course was a final Integrated Staff Exercise (INSTEX), involving coordination and cooperation among different branches within the headquarters and with other partners in a multidimensional/integrated mission in a Force or Sector Headquarters.

Seychelles was represented by Captain Allain Pierre, who stated that the course was an incredible learning experience, which has equipped him to take the role of a staff officer in any United Nations mission.  Capt Pierre is currently on the UN and EASF Roster for deployment.

STAY UP TO DATE WITH SPDF