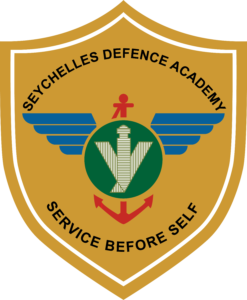 On the 2 June 1990, the President France Albert Rene officially opened the Seychelles Defence Academy (SDA). With several blocks of modern classroom buildings, offices, sleeping quarters and mess; and amenities such as gymnasium, library and museum, SDA is the premier training institute of the SPDF.

The first training camp was established at Point Larue, along with the HQ at Bel Eau. This was known as the Military Training Centre (MTC). The first training was conducted with the help of Tanzanian Military Advisors and former British Army personnel. Seychellois civilians were recruited to undergo a rigorous three-month  Recruit training programme, followed by two months of specialist training in the field of support weapons, communications, infantry tactics, MP and clerical duties. Brigadier Leopold Payet was one of the first trainees at the MTC.

With the considerable support received from friendly countries, it was decided to shift the camp to South East Island, by virtue of its excellent training environment.

Training at the SDA includes service and academic subjects. The Academy has a pool of trained instructors and also organises guest lectures delivered by eminent personalities. In addition the Academy provides Promotion Cadres and exams. Six separate courses can be conducted at the SDA simultaneously.

The Academy has a well-equipped gymnasium and library. In addition, it has a museum which exhibits the rich past and present of the SPDF. Soon the Academy will shift to its new location at Ile Perseverance.