The year 2018 marked 100 years since the first world war ended. Seychelles joined with the rest of the world on Sunday 10th November 10, 2018 to honour those who died during the war. History has it that the Seychelles lost around 300 young men during the four years of war. 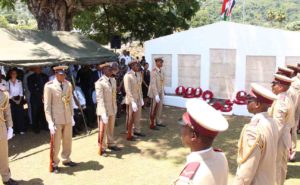 Family friends and sympathisers met for a religious service and wreath-laying ceremony to pay their respect to  Seychellois soldiers who fell whilst fighting in the British army in the First Word War of 1914-1918 and that of the Second Word War 1939-1945.

The ceremony at the Mont Fleuri cemetery started with a march past by some ex-servicemen to the cenotaph. they were followed by families and friends who also marched to the tune of the national brass band. Reverend Danny Elizabeth and SPDF Chaplain, Lt Col Louis Agathine were also present to lead with prayers offered for this solemn occasion.

Following the general salute of the SPDF Guard of Honour and the mournful sounds of the bagpipe played by Sgt. Anthony Pattisson of the Natal Mounted Rifle South Africa; the British High Commissioner Mrs Röshler,  Vice-President Vincent Meriton, Ministers, members of the National Assembly, members of the Diplomatic corps, Local and foreign Military officers, as well as families and friends present all laid poppy wreaths and flowers at the foot of the cenotaph.

STAY UP TO DATE WITH SPDF

Can not find the user! Follow us on Insta